Peloton (PTON) is one recent IPO so many traders have their eye on right now… especially since it just got demolished after the largest shopping day in the U.S.

You’d think there would be cycling fanatics who would swipe up those deals… instead, many were offended by one of their ads — criticized as “sexist” and “classist”.

The thing is… the ad first appeared last month, and comedians came out the woodwork, ridiculing the company.

As traders, you’re probably wondering… who cares about one little ad? Couldn’t they just pull it?

Well, technically they can… and generally, with “blue chip” companies… they’re bulletproof against headlines like those. However, with a company that recently hit the market, these factors matter and hurts their bottom line.

The question IPO traders are asking is whether PTON is a buy at these levels.

Should You Pile into PTON?

Right now, I think it’s time to be patient with PTON, as the stock just lost hundreds of millions in market cap. This could be a chance for all the longs to take some profits off the table… but with more than a decade of experience trading IPOs, I know how they operate.

IPOs could move a lot farther and faster than you might think, and what helps to identify clear levels to buy are chart patterns. As well as take a look at some statistics.

First, let’s take a look at what’s going on behind the scenes with PTON.

Right now, the stock has a short interest of a whopping 63.29%! Not only that, but its shares floating sits at 43.69M. That means the stock is not only a “low float” it’s a potential “short squeeze” play.

However, with sentiment at an all-time low, there’s an ongoing battle between the bulls and the bears.

That’s something only time will tell. The only thing we can do is develop an attack plan.

Check out this daily chart in PTON. 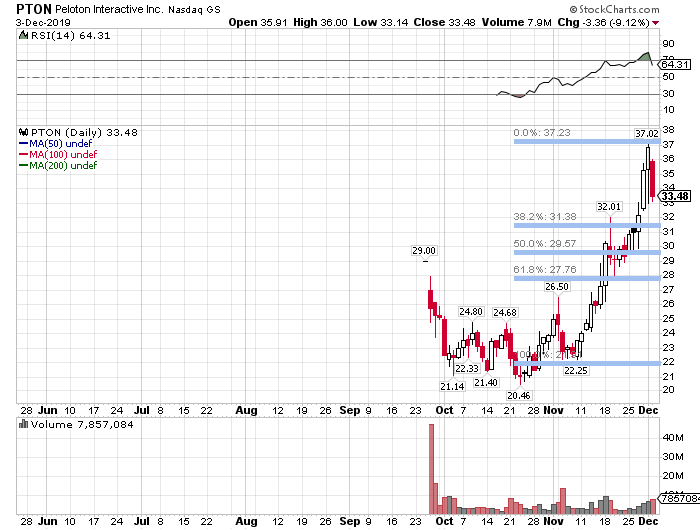 Yesterday, we saw PTON drop 10%… as the stock got pummeled from the backlash of its ad. Many analysts are analyzing the ad — some think they will just pull the ad and the controversy will slowly die down.

However, if you look at some of the blue lines in the chart above… it helps us find “hidden entry” zones in PTON. Those are Fibonacci retracement patterns, and the first line of defense is at $31.38 — the 38.2% retracement level.

For me, I’ll keep an eye around the $30 level / 50% retracement. That should be a key psychological level, and it will let us know whether traders want to buy or sell PTON. If the stock holds around the 50% level, I think it could build some momentum and potentially take out all-time highs.

Not only that but if there’s a positive catalyst (think high sales from the holiday shopping or raising guidance)… the shorts could get squeezed, leading to a massive run higher.

As always, I’ll be patient and develop a trade plan, and I’ll let my clients know if I get into PTON for a move higher.